I don't do festivals. Crowds and portaloos are reasons enough to keep me away, but throw in camping and I run a mile. I can understand therefore why EDdad looked very confused when I suggested Camp Bestival. I guess it was partly for his sake as he likes both camping and festivals and partly for EDtot as I'd heard such good things about this family festival, I knew she would enjoy herself.

If I was going to introduce EDtot to the world of festivals, it needed at least to be a gentle start for both of us. Camp Bestival, the baby sister festival to Isle of Wight's Bestival, seemed like the ideal choice and to further ease the trauma of lugging huge amounts of belongings to a field far away, we chose the glamping option and booked a bell tent in the Boutique Camping section.
Boutique Camping unfortunately does not mean complete luxury. You're still in a tent in a field with shared toilets and showers, but I was very happy that we paid extra to have a spacious tent ready for our arrival complete with airbed, duvet, pillows and rugs on the floor. The toilets were proper flushing loos with nice sinks and mirrors and for the most part were well stocked with toilet roll and hand wash (not just hand sanitiser...actual hand wash!). The showers were Posh Wash ones and apart from one morning when a few were a tad chilly, they were lovely and warm. The queue at peak times was only around 20 minutes which is nothing compared to the wait on The Other Side of the Fence. The Others also had Posh Wash options, but as the numbers wanting to use them were far greater than in Boutique, I'm told the wait was sometimes over an hour (although in the middle of the afternoon, there was no queue at all).

Our Boutique Camping providers were Sleeping Bells and they had decorated the tents with lovely bunting and fairy lights. Their tents also had a little porch area which came in very handy as a buggy park or for cool boxes. Most importantly, they started off our CB experience with a much needed glass of Pimm's! By this time it was late afternoon so we headed into the main fields to explore. 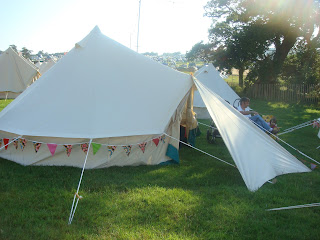 Only one field was open on the Thursday to provide some light entertainment and food and drink. It was more than enough though as most people were still busy putting up tents and getting to know their neighbours. EDtot was quite in awe of the space she had to run free and the fact that most of that space was on a slope so running (and therefore falling and rolling) was just far more fun. It was absolutely lovely to watch her find her confidence and charge off down the hill - well, it was lovely for me as I sat on the rug outside the Wagamama Lounge watching her...EDdad was on chasing duty. 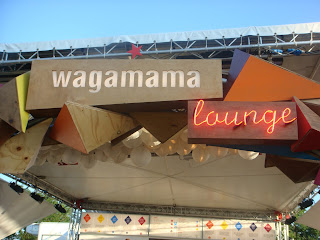 It is around a 10 minute slow walk (with buggy) from the Boutique Camping section to the main fields. The first day we didn't take too much with us as the plan was to return to the tent for EDtot's lunchtime nap. That turned out to be a flawed plan as EDtot really, really did not want to nap and so the rest of the weekend we packed up everything we would need for the day and stayed in the main fields from around 9am until 5pm. EDtot would eventually nod off in her buggy around 2pm which gave us an hour to relax, people watch and eat delicious Purbeck Ice Cream. After popping back to the tent to change shorts/shoes into warmer evening wear (the coastal breeze is quite chilly!) we would head back to the main fields for the evening's entertainment.

The choice of entertainment was overwhelming for a festival newbie. The first morning was spent getting to know the layout of the fields and check out the food options on offer. There were so many options! We didn't get to try half the delicious looking dishes being prepared, but ended up snacking a lot on smaller items like the sweetcorn in the kid's field and the scrummy waffles with bacon and maple syrup in the Young British Foodies tent. The YBF tent was definitely the best place to try something different and a few feet away the WI ladies were on hand to provide very reasonably priced sandwiches, cakes and a cuppa.

With so much to see and do, we didn't even realise until the last night that there were some amazing kiddy meals available in the Lower Kid's Garden. Up until that point, EDtot had stayed loyal to the mac 'n' cheese. I admit, not many vegetables made it onto her plate that weekend. As her meals the rest of the year tend to be fairly well rounded, I was not about to get hung up on that one. EDtot sensed the relaxed attitude to food and made the most of it for the first day, but by day two was actually turning down unhealthy snack options in favour of an apple. Never thought that would happen!

I had originally thought the festival was geared more towards the over 5's and whilst they probably do get more out of it than the tots, there is definitely a LOT for little ones to see and do. EDtot rolled around in the Soft Play tent, learnt dance moves on the Space Dance stage, created a beautiful picture in Art Town, gazed in awe at the beautiful, giant flags flapping in the wind, threw around hula hoops and diabolos, played for aaaages in the giant sandpit, cheered on her horse on the carousel, ran around as a fairy on fancy dress day, chased millions of bubbles at Bubble Inc, listened to stories in the Dingly Dell, oohed and aahed at the horses at the jousting, and danced, a LOT. She danced to Richard Hawley, The Cuban Brothers, Grandmaster Flash, the Levellers, the many awesome tunes blaring out of the Disco Shed and the all important Mr Tumble. 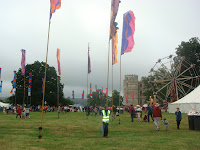 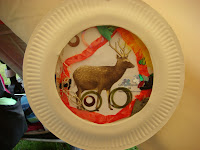 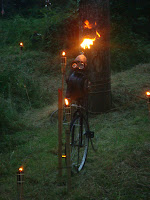 Mr Tumble was definitely the main draw for the under 5 crew. We were prepared for there to be huge crowds for his performance on the Saturday morning, but it was a real shame that so many adults decided to stand with their tots on their shoulders even when they had a clear view of the stage. Once a few people stood at the front, everyone around them had to do the same or suffer missing out altogether. It really wouldn't have taken much for an announcement to be made before Mr Tumble came on stage to ask all adults to sit down. I've heard that this was done in some of the tents for other kiddy shows. EDtot looked distraught at the possibility of only listening to the show so we had no choice other than to pop her up on EDdad's shoulders. She thoroughly enjoyed the show though and keeps watching the video of herself dancing to Best of Friends. Catchy tune. 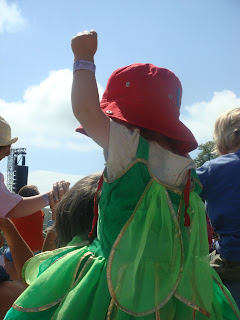 We managed to catch a few other acts and shows, but mainly we wandered around the fields soaking up the amazing festival atmosphere. There were a few idiots who clearly didn't care at all about their or their kid's behaviour, but for the most part everyone was in good spirits and considerate of others around them. I was really keen before the festival to buy a trolley to transport EDtot and all our stuff around the site, but having read a few reviews online, I decided to wait and see for myself what it was like. Whilst I really liked the look of them, especially the pimped up ones, they seem better suited to families with 2+ young tots to ferry around. They are very heavy to drag up and down the hilly grounds of Lulworth Castle and you have to be quite determined to get them in and out of the main arenas without hurting or annoying anyone. Some of the aforementioned idiots were also quite happy to block the view of those behind them by bringing their trolley complete with canopy to the front of events. If you really must be at the front, at the very least take down the canopy!! 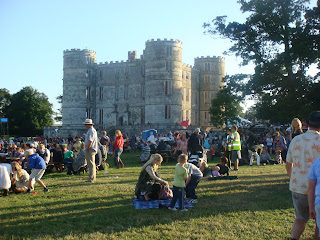 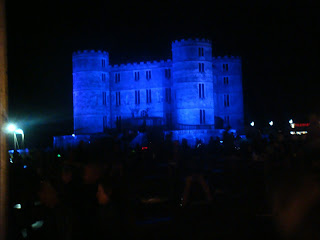 We ended up using the buggy everyday as EDtot napped in it in the afternoon and then fell asleep in it in the evening (although normally not until we were walking back to the tent around 11pm!). Even with just a buggy, I found it tiring trying to get around and manoeuvre through the crowds so for the Grand Finale Extravaganza we decided to just use the sling and it really made a difference to how quickly and easily you can get around. Luckily we had amazing weather all weekend so we didn't have to worry about dragging the buggy across muddy ground. It was only on the last night that the rain started, but even then it had cleared by the time we were packing up to leave on Monday morning.

As for the facilities in the fields, there were definitely issues with the number of loos available and with such long queues we did find we drank a lot less. My liver is grateful for that at least. I was very glad though that we hadn't started potty training EDtot as even the kiddy loos had long queues. I quickly learnt that the sawdust loos were the ones to head for as they were more spacious and definitely smelt less! My liver is also grateful for the lack of decent lager options, but if you like your cider, you'll be fine.

I was aware that if I tried to organise our weekend to catch various acts, I would probably make it far too stressful an affair for us as festival newbies. So we did miss a lot, but it made for a very laid back and enjoyable experience. I wouldn't call it relaxing (although that could have been remedied by a massage in the Soul Park), but it was very good fun. The biggest shame was that we didn't get to see more of our friends who were camping in different sections. The virtually non-existent mobile signal meant texts weren't received until hours after they were sent. It is difficult to co-ordinate times and places to meet in advance when you're dealing with lots of different aged tots all wanting to do different things and needing meals and naps at different times. The times we did meet up though, were great fun.

It's hard to describe what a brilliant atmosphere there is at Camp Bestival. You do feel like the organisers have really made an effort to make it a special event and to cater for all the family. My favourite thing about Camp Bestival is hands down the effect it had on my little EDtot. It brought her out of her shell and it was amazing to see her enjoying herself all day long. She hasn't stopped talking about "going 'amping wif Mr Tumble" so whilst I wouldn't say I'm a convert to the camping lifestyle, I think we can safely say we'll be back in 2014! 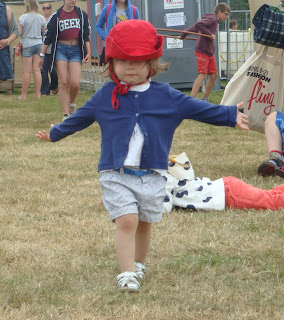