Not an Eighties revival. It was a day out for EDtot into Central London. We were off to meet my aunt and cousins for lunch and shopping. Whilst EDtot loves a good social lunch, the shopping part was bound to be traumatic unless I could work it around a nap.

The day before I had spent a ridiculous amount of time searching for play options around Oxford Street, but it would seem that the nobody has felt the need to open a soft play in the heart of London. A huge failing and missed opportunity if you ask me! Anyway, we settled on the next best option - an area for EDtot to roam free. The forecast was for rain so off to the London Transport Museum we went.

At £15 per person it is not a cheap outing, but if you live in London it is worth the money as that £15 buys you an annual ticket. It is based in Covent Garden and so will be a great stop off for us on our way into town by bus or train. The only downside at the moment is that EDtot is not quite walking yet. She can manage a short walk holding our hands, but is too scared to venture off on wobbly legs. So we end up hobbling around slowly or carrying her from one exhibit to the next.

In any event, it was a lovely way to start the day and after an hour in the museum with our friend and her little boy, we set off for Oxford Street. We had a lovely walk up through Chinatown and Soho, ducking and diving through narrow streets and picking up some delicious waffle balls on the way. They are a staple street food in Hong Kong and I am still trying to work out the correct recipe for them.

Selfridges' cafe was our meeting point with the aunt and cousins. I wouldn't tend to head there if I was on my own as it is canteen style service and I would end up with food tray and buggy going flying as I tried to manoeuvre through the tables. Thankfully it is all a lot easier when you have extra hands to help. After a relaxed lunch we decided to have a little wander around the store and at the same time try to get EDtot to nap in her buggy. I had specifically brought the Beast of a Buggy as it is more comfy, but she had other ideas and after I returned from trying on an outfit, I found she had convinced my aunt that life would be better for all concerned if she was allowed to get out of the buggy and walk.

So we enjoyed a snail pace shopping experience with one very happy toddler who was thrilled to have two hands to support her on her epic journey through the store. I'm not sure how well my aunt's and cousin's backs coped, but it worked well for me! We also found a mini-entertainment pit stop in the form of two toy cars in the kiddy clothes section. Big enough for EDtot to sit in and with a couch and telly beside it to relax in. 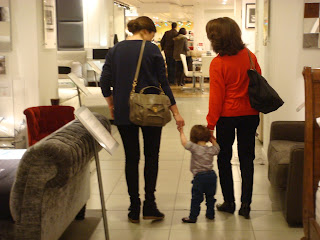