I love those days when we act like tourists in London. They aren't a regular occurrence as we normally have something we need to do on our trips into Central London. So it was even more fun that our latest Tourist Day was unplanned. 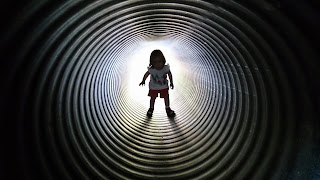 We set off to Battersea Park Zoo for opening time at 10am. It is a children's zoo in a beautiful park and with the added bonus of being right on the river. There are the usual animals to see including lemurs, meerkats, snakes, otters, monkeys, donkeys and birds. The surprising thing about it is that there is also an amazing toddler playground spread out over one corner of the zoo and EDtot spent just as long there as she did checking out the animals.

After a quick sandwich from the cafe, we decided to continue our day out by heading down to the Thames. Although EDtot can get through the day without her midday nap, life is much easier all round if she manages at least an hour. So we drove around for a while and thankfully she dropped off so we headed to Bankside and eventually found a parking space.

We jumped on a Thames Clipper boat heading to North Greenwich. Well, jumped is a little misleading. We queued and waited and queued and waited. I don't know how busy they are midweek, but it was always going to be a slow affair on a Bank Holiday. EDtot has a few London based books and so was thrilled to spot landmarks from her own stories. I must try to find some Far East based kiddy books for our next trip to see the grandparents!

After Tower Bridge the journey speeds up considerably, which was lucky as EDtot had had her fill of bumbling along the river. When we arrived at North Greenwich we toyed with the idea of heading for the cable car which is a short walk away, but it was getting late in the afternoon so we settled on a mooch around the O2 and a quick play in the little fountain before jumping on the tube back to Waterloo.

It was too late to head back home for dinner so we rounded off the day with some sushi before enjoying a leisurely stroll along the Southbank to the car. A fabulous touristy day out with something for everyone. 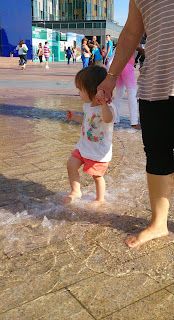 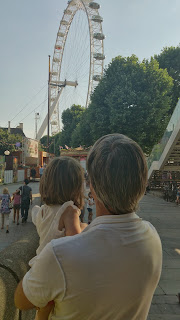 *Apologies for the radio silence on the blog. It has been a busy ol' summer and updating the main EDtots site with the new term's activities has taken up most spare time.
at 21:15